Diversity is One of Our Greatest Strengths
Unity is Our Power 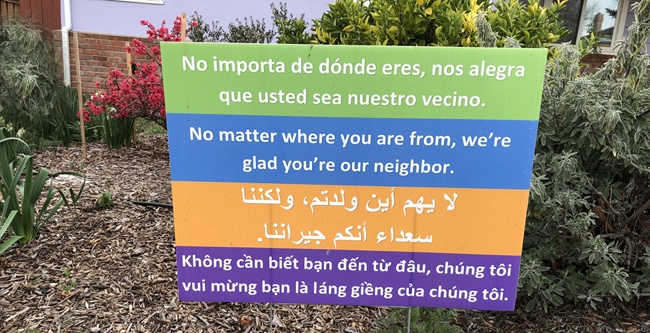 My grandfather Francesco, left his dirt poor village in Sicily for America at the age of 16, after his father was murdered by gangsters. He worked in the cement yards in Chicago and augmented his income with bootlegging. One at a time, he brought his brothers and sisters to share the opportunities that could be found only in the United States.

At that time in the U.S., Italians had replaced the Irish as the “Asians” who didn’t deserve to be here. Even the other Italians looked down on the Sicilians. After establishing his family in Chicago, Francesco saved his money and bought a 20 acre apricot ranch in Palo Alto. He worked tirelessly on the orchard and put his 3 sons through Stanford. Nonetheless, even though he was doing better than many “Americans,” it was not enough to prove himself worthy to be here.

His insecurity was validated in 1941 when the U.S. government started detaining or displacing thousands of Italian-born Americans, as state enemies. When the Japanese Americans were more aggressively rounded up and interned in 1942, it only increased his fears. The government backed off the campaign against Italians after a year, when it was realized they were needed for the invasion of Italy. But it was still clear to my grandfather that strangers who knew nothing about him other than his ethnicity, could declare him to be a threat and take everything he had worked so hard to acquire.

As any father would, he passed on to his children information they needed to be safe – the importance of being accepted by America. All 3 of his sons served in the military during the war, but after defending American values in Europe, they did not defend them when they returned home. They did not stand up for Asians and Latinos when they were shunned, bullied, robbed and even murdered only for their ethnicities. They accepted the legacy of cruelty and greed, possibly feeling safer to no longer be the primary targets. They were not secure enough within the “American caste system” to challenge injustice.

I was a little girl in the early 1950’s when a young Chinese couple bought a house on the corner of our street in Mt. View. We lived in a new neighborhood – only 12 houses in what had recently been a prune orchard. It was the American dream in post-WWII to buy a house, and the couple probably shared that dream. Our neighborhood was quite friendly, but they kept to themselves. I think that generally, people assumed it was a Chinese cultural thing. After a few years, the husband died and his wife, Nancy, lived there alone until recently. I never saw any visitors. Every day I would see her walking alone, in a long trench coat and large floppy hat, no matter what the weather. I was unaware of my possible connection to Nancy’s self-imposed isolation.

About 10 years ago, we were forming a CERT (Community Emergency Response Team) for disaster preparedness in our neighborhood. One of the goals was to identify the potentially vulnerable people, so that someone would be sure to check on them if there was an emergency. We identified 3 elderly ladies who lived alone, and set out to explain the neighborhood plan. We were offering to have someone look in on them if there was any reason to think they might need help.

I spoke with Nancy and she wanted nothing to do with it. I was surprised at how adamant she was. I imagined that if I were over 80 years old and living alone, I would find it comforting to have someone checking in on me. I thought I must have unwittingly done or said something to offend her. Later, when I commented on her response to my mother and she shared information that gave me a whole new perspective.

My father was an unsuccessful Real Estate Broker at the time Nancy and her husband bought the house. He had circulated a petition around the neighborhood to protest the purchase, on the basis that everyone’s property would lose value due to this demographic change.

My mother said she had been really angry and tried to stop him, but my father insisted that it was just business and there was nothing racist about it. As a Real Estate professional, it was his duty to let the neighbors know that everyone’s property was being devalued by the presence of the Chinese couple. Mother didn’t think that anyone had signed his letter, and in any event, the deal had closed. They moved in, having zero effect on property values.

Of course it made sense! Nancy and her husband must have known about the petition. I could imagine the sadness and disappointment experienced by the young couple. They must have been happy to be purchasing a house (perhaps their first) in a new neighborhood, until they found out that before they even moved in, a stranger had invited all of the neighbors to resent them. For the 60+ years Nancy lived in that house, she never made friends or participated in any neighborhood gatherings. It must have seemed ironic when the daughter of the person who had been instrumental in her isolation tried to include her in the neighborhood disaster plan.

A couple of years ago, Nancy fell down and was unable to get to a phone. She laid on the floor for 4 days until her sister in Seattle got worried and had the police do a wellness check. She was almost dead from dehydration. When she got out of the hospital, she was moved to a rest home close to her sister. The house has been empty ever since.

This is just a small example of the insidious and lasting damage of the racism permeating our society. Had I not accidently discovered it, no one would have ever been aware of the 60 year old hate incident and how it altered the lives of 2 innocent people. I don’t know what Nancy was like, but she might not have chosen to be a recluse all those years if she had known that my father’s letter did not reflect the feelings of the neighborhood. It was just one alcoholic man with self-esteem issues and too much time on his hands. The neighborhood was denied the presence of the young Chinese couple who might have brought a welcome diverse energy to our block. Everybody lost something, but no one lost as much as the young couple, who felt the need to distance themselves from the people around them in the place where they lived.

I have since mentally apologized to Nancy and anyone else who was harmed by my father’s misguided attempts to achieve a sense of belonging. He would insist that he was not trying to hurt anyone, but the feelings of Nancy and her husband were never a consideration for him. If he was alive today, he would probably defend his actions, saying he was just doing what was best and besides, “no harm was done.”

Even though I didn’t agree with my father, I have benefited from the system he defended. For much of my life, I have recognized suffering and done what I could to help the victims, but I have not known how to stop the attacks. In some ways, I have been an unwitting silent partner in this indefensible situation, perpetuated across generations. I can’t expect those who are being attacked to be grateful for my first aid.

I am currently attending meetings for the development of an anti-hate crime effort in Santa Clara County. I have listened to stories about verbal or physical attacks and how they have impacted people in ways that have long been ignored. Some people still seem to feel entitled to act out their resentments, with no concern to the effects on the lives of others. These assaults are not going to improve the lives of the attackers. Their anxiety and frustrations are not the fault of the Asians or Muslims or whoever is the target of the moment.

These are difficult times for everyone. I can only imagine the additional stress that would come from knowing that some of the people around me wished me and my family harm, only for our ethnicity. If we did nothing to deserve it, how can we change it? It would only be worse if I asked for help and no one believed me.

The perpetrators of this current wave of hate crimes believe that they have been cheated and no one cares. Finally someone said he cared, but instead of addressing their problems, he told them to take back what was theirs by attacking immigrants. While they were distracted, he took even more from them. The attacks must be stopped, but punishment alone will only increase their sense of victimhood. And this misguided cruelty is a distraction from other real dangers, such as climate change, that we all must face.

My father often began sentences with “I’m not a racist, but…” Offering him an alternate perspective was not a rewarding experience. I could not understand his need to force my agreement with concepts that made no sense. But he was just trying to pass on the teachings that he had received from his father. I think he was concerned that if I didn’t accept his prejudices, I would not be safe. It was his way of showing love. Other people may have believed the messages from their fathers and might feel that renouncing the passed down prejudices would be an act of betrayal to their tribes. I understand, but I cannot accept a personal choice that threatens the well being of others. Racism is not a family tradition that must be honored. It’s a bad habit that needs to be broken.
In the last years of my father’s life, our conversations were carefully orchestrated to avoid certain minefields. The events of the past few years have made it clear that we can’t avoid the minefields created by our ancestors. We are living in them and devices planted decades ago are exploding all around us. It is impossible to ignore the injustice and the active or passive roles that we all play. I do not accept the guilt for what my father did, but I do accept responsibility for the outcome that I inhabit. I am breaking my ancestral chain of judgement and separation and working with others to secure safety, equity and respect for all involved.

Treating generational wounds requires patience and love, and is best done in community. I’m all in. I know that selfishness is not sustainable, even if it is legal.

Love will set us free.